A major benefit of injecting dependencies to your classes through the Init method is that it makes it easy to decouple your components from specific implementations when you use interfaces instead of specific classes as your argument types. The list of arguments that the Init method accepts also makes it very clear what other objects the client objects depends on.

On the other hand, the ability to assign values using Unity’s inspector is also a very convenient and powerful way to hook up dependencies; you can completely change object behaviour without having to write a single line of code!

The Initializer system is a solution that aims to marry the best of both worlds.

The easiest and recommended way to create an Initializer for a component is to have Init(args) generate it for you automatically.

When you have a component that derives from MonoBehaviour<T…> or implements IInitializable<T…>, an Init section will automatically appear at the top of the components of that type in the Inspector.

To generate an Initializer for the the component class, click on the + button in the Init section and select “Generate Initializer”.

In such cases you can select the script asset that defines the class in the Project view and select “Generate Initializer” from the context menu.

It is also easy to create new Initializers in code for your components by deriving from the Initializer<T…> base classes with the type of the component class as the first generic argument, followed by the types of its Init parameters.

For example, to define an Initializer for component Player, which derives from MonoBehaviour<IInputManager, Camera>, you would write the following:

This means that Initializer<T…> classes have all the same limitations that fields with the SerializeReference attribute have when it comes to serialization: most notably the lack of support for serializing generic types (with the exception of List<T>).

In cases where you need an Initializer to serialize an object that isn’t supported by SerializeReference, you can derive from InitializerBase<T…>, implement the properties for all the arguments, and handle serializing them however you want.

To define an Initializer for a Wrapper, derive from the WrapperInitializer<T…> base class, with the type of the wrapped C# class as the first generic argument, followed by the types of its constructor parameters (assuming that a constructor is being used to pass in the object’s dependencies).

Secondly you need to override the CreateWrappedObject function with parameters matching the constructor parameters of the wrapped class, and implement the logic for creating the wrapped object.

This issue can be resolved by splitting creation of the wrapped object into two phases: first getting/creating the instance, and secondly passing to it its Init arguments.

Get Or Create Instance Step

To enable the first step to happen, you need to also override the GetOrCreateUnitializedWrappedObject function.

Alternatively if you add the [Serializable] attribute to the wrapped class, then the Wrapper will hold an uninitialized instance of it by default, from which the default implementation of GetOrCreateUnitializedWrappedObject can automatically retrieve it.

To enable the second step to happen you need to have your wrapped class implement IInitializable<T…> for receiving the initialization arguments in a deferred manner. 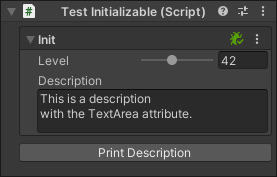 Sometimes you may want to customize how the Initializer arguments appear in the inspector by adding PropertyAttributes to them.

To do this, you will need to add a private nested Init class inside the Initializer, and then define a field for each Init argument accepted by the Initializer’s client with their order ordering and types matching those of the arguments in the client’s Init method.

Any property attributes you attach to these fields will then get used when the corresponding initialization arguments are drawn in the Inspector.

Alternatively you can derive from InitializerBase<T…> which gives you the ability to manually define serialized fields to hold the data for all the Init arguments.